Most people are not aware of the power of their thoughts or they dismiss the Law of Attraction as a myth. Nothing could be further from the truth. Without question, we manifest what we think about.

“Thoughts Are Things” Napoleon Hill wrote in his famous book Think and Grow Rich nearly a century ago. Yet, to this day, many people still don’t understand how meaningful and consequential this short phrase really is.

To someone who might not be familiar with the concept of manifestation, it may seem like a nonsensical statement – even absurd! But to a success conscious individual, it is a powerful statement and within it, life’s most precious secret.

The Fresh Prince Manifests With the Law Of Attraction

One such individual is Willard Carroll Smith Jr., better known to his fans as Will Smith or The Fresh Prince. For those of you who aren’t familiar, Will Smith is an American actor, producer, and rapper.

In April 2007, Newsweek called him “the most powerful actor in Hollywood”. He has been nominated for five Golden Globe Awards, two Academy Awards, and has won four Grammy Awards.

So, if anyone knows a thing or two about success, it’s Mr. Will Smith!

While some might attribute their success to hard work, tenacity, or being in the right place at the right time, Will Smith has publicly and frequently shared his belief in the Law of Attraction. Not to discount these other circumstances – after all, the Fresh Prince has said “I will not be out-worked, period” – but the Law of Attraction remains a constant reference in several interviews.

At 1:20 of this interview with Tavis Smiley, Will says

there’s a redemptive power that making a choice has you know, rather than feeling that you’re at affect to other things that are happening. Make a choice right! You just decide what is going to be, who you are going to be, how you’re going to do it. Just decide and then from that point, the universe is going to get out your way. It’s like the water, it wants to move and go around that stuff you know. So for me, I want to represent possibilities, I want to represent the idea that you really can make what you want, one of my favorite books is The Alchemist, Paolo Cohellio and that’s just, I just believed that, I believe that I can create whatever I want to create if I can put my head on it right, study it, learn the patterns, and you know it’s hard to put it in words, real metaphysical aspects, but I feel very strongly that we are who we choose to be.

Nothing Manifests Without A Thought

Everything starts with a thought! The Wright brothers had thought about making flying a reality. Soon enough, it became a reality for them, and we are the beneficiaries. Bill Gates had an idea (thought) about making the computer easy to operate and accessible to everyone. His thought manifested. Look around you. Everything that you can see was first someone’s thought or idea, which led to a design or blueprint, which led to a prototpye before it appeared in your reality. Successful individuals understand the basis of the Law of Attraction, which is like attracts like. Thoughts of success will attract successful results.

At the level of thought, “things” are nothing but random energy waiting to be “assembled”. Yet they are as real as electricity is real. We can’t see electricity, but we know beyond a shadow of a doubt that it exists. We also know that thoughts are real because everything that has ever been invented or created in our physical world began with a thought. The manifestation of the “thing” from the invisible plane into our physical world is enabled by the persistence of thought. 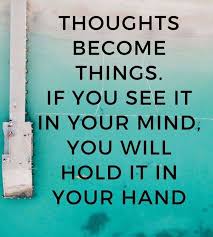 Whether positive or negative, be aware of what you are thinking about. Become hyper-cognizant that your thoughts become things in your physical world. Have you wondered why some things seem to come so easily for some people while the things that you wish for seem to take forever if they happen at all? Take the time to think about what you spend most of your time focused on. According to the National Science Foundation, the average person has about 12,000 to 60,000 thoughts per day. Of those, 80% are negative and 95% are repetitive thoughts. So, odds are good that you are focusing on things like

If you are spending most of your time on negative thoughts, unfortunately, you will continue to experience this negative reality.  Remember, like attracts like.

What Does The Science Say?

The point to keep in mind is that thoughts are as real as any physical thing. Just as sure as you are that the earth is round, so you must be completely convinced that your thoughts are real, and more than that, they have the power to create your reality! So go ahead. Think yourself into riches, a new home, a new car, an opulent lifestyle, happiness, meaningful relationships, peace of mind…whatever you desire. The Law of Attraction does work. All you need to do is manifest your reality with your thoughts like the Fresh Prince!