Welcome to the second part of this special three part series commemorating the 21st Century Edition of Napoleon Hill’s landmark work, Law of Success, in which he reveals 17 Principles of Success based on his 25 years of research studying the lives of over 500 of the world’s greatest achievers. (To read the first part, visit part 1 here).

In this special three part series, I’m highlighting these 17 Principles from the Law of Success both as a refresher for those who are already familiar with Hill’s work, and as an introductory guide to the essential qualities of achievement for those who have not yet had the chance to study this great work.  It is my hope that you will embrace some – if not all – of these principles to maximize your efforts in the new year!

“Imagination is the workshop of the human mind and creative power of the soul,” writes Hill. “First comes thought; then organization of that thought into ideas and plans; then transformation of those plans into reality. The beginning, as you will observe, is in your imagination.” 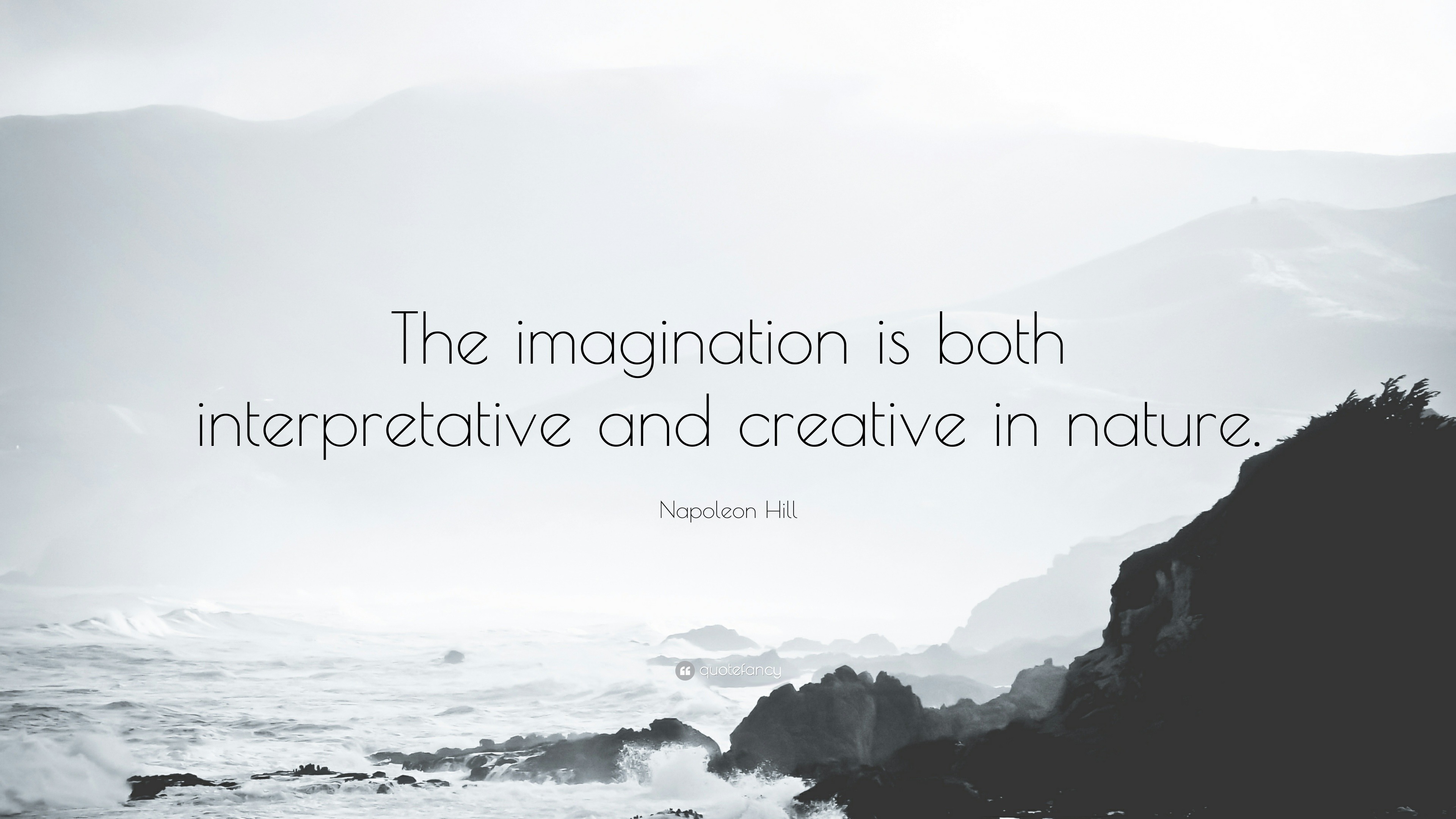 Synthetic Imagination: Through this faculty, one may arrange old concepts, ideas, or plans into new combinations. This faculty creates nothing. It merely works with the material of experience, education, and observation with which it is fed. It is the faculty used most by the inventor, with the exception of those who draw upon the creative imagination, when he cannot solve his problem through synthetic imagination.

The invention of the iPod is an example of synthetic imagination, creating a music player like a “walkman” and utilizing a small computer hard drive to play MP3 files – two existing technologies combined to make a better product.

Creative imagination is the apparatus by which thought vibrations are received from the minds of others. It is through this faculty that one individual may “tune in,” or communicate with the subconscious minds of other men.

Between the two, creative vision is far more rare and is the application of an entirely new, creative and fresh idea. A great example Hill often used was Edison’s breakthrough insight for the light bulb as he awoke from one of his famous catnaps. This was technology that was completely original.

Enthusiasm comes from the Greek root “entheos” which literally means God within. Enthusiasm is the vital force that impels action. Great leaders inspire others to action from their own enthusiasm which is highly contagious.

“It’s not so much what you say as it is the tone and manner in which you say it that makes a lasting impression,” writes Hill. 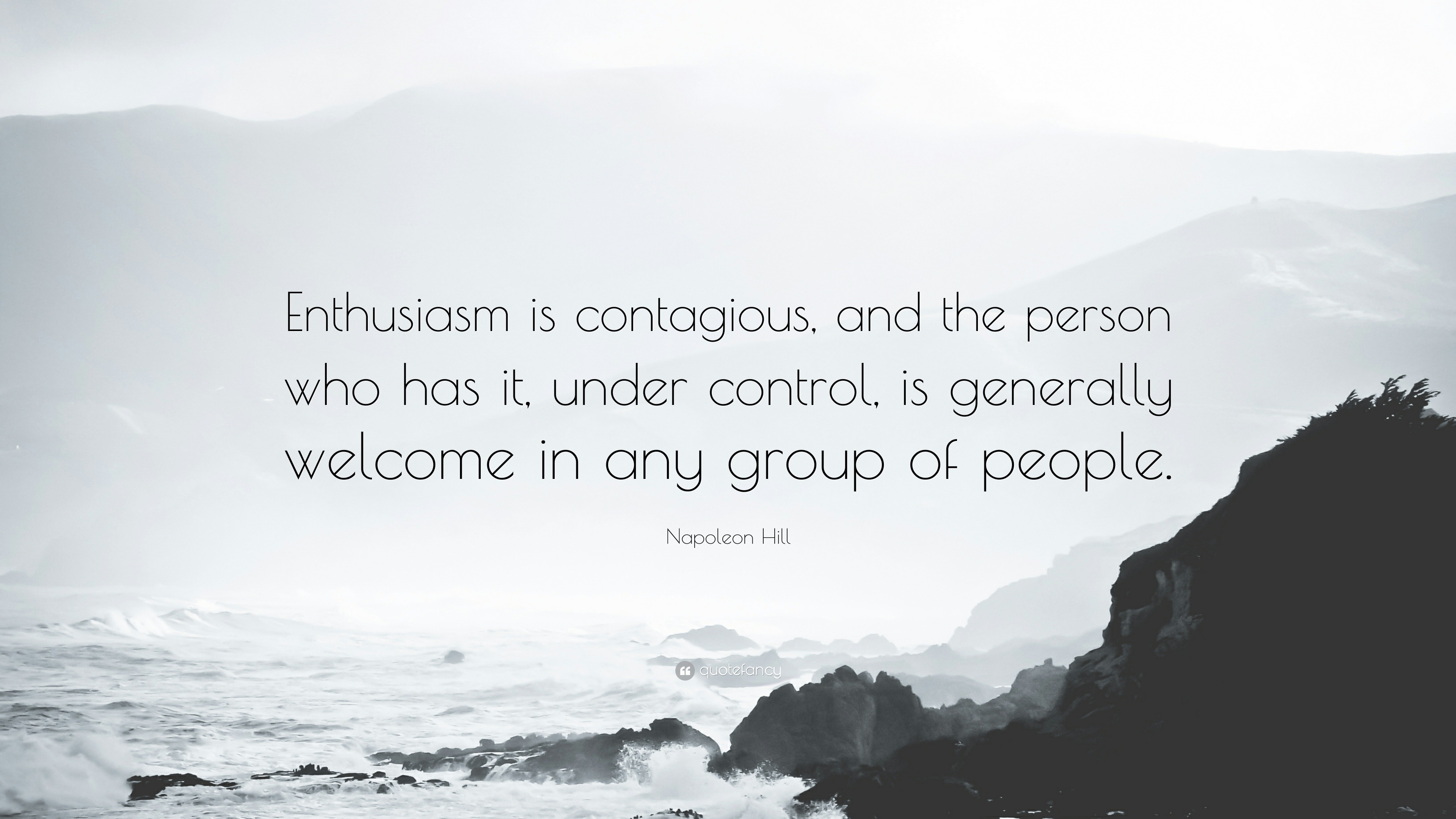 As a wise person commented to me on one occasion, “nothing is as infectious as enthusiasm!” and I believe that he was absolutely right. If, for example, you are a salesperson, how do you expect to get other people interested in your products and services if you yourself are not enthusiastic about them?

Case in point: I recall a time when a “recruiter” called and left a message for me requesting an interview. I checked out the company’s website and liked what I saw. I was ready to go in for an interview, but when I returned the recruiter’s call and spoke to her, the tone of her voice clearly indicated that she wasn’t happy with her job and that I was just a number to make her appointment quota.

While the conversation was polite and professional, her tone and manner of speaking said she didn’t care. Needless to say, I did not go in for the interview, and it wouldn’t be a far stretch to guess that that recruiting company was losing business – and  probably hundreds of thousands of dollars in revenue – by the truckload because of that one person.

Whether at work or pursuing a passion project, enthusiasm is what keeps you motivated, excited, and moving forward.

Hill keenly points out that self-control directs your enthusiasm. A wise business tenet is to keep cool when others are hot. As Hill says, “Those who control themselves usually boss the job.” 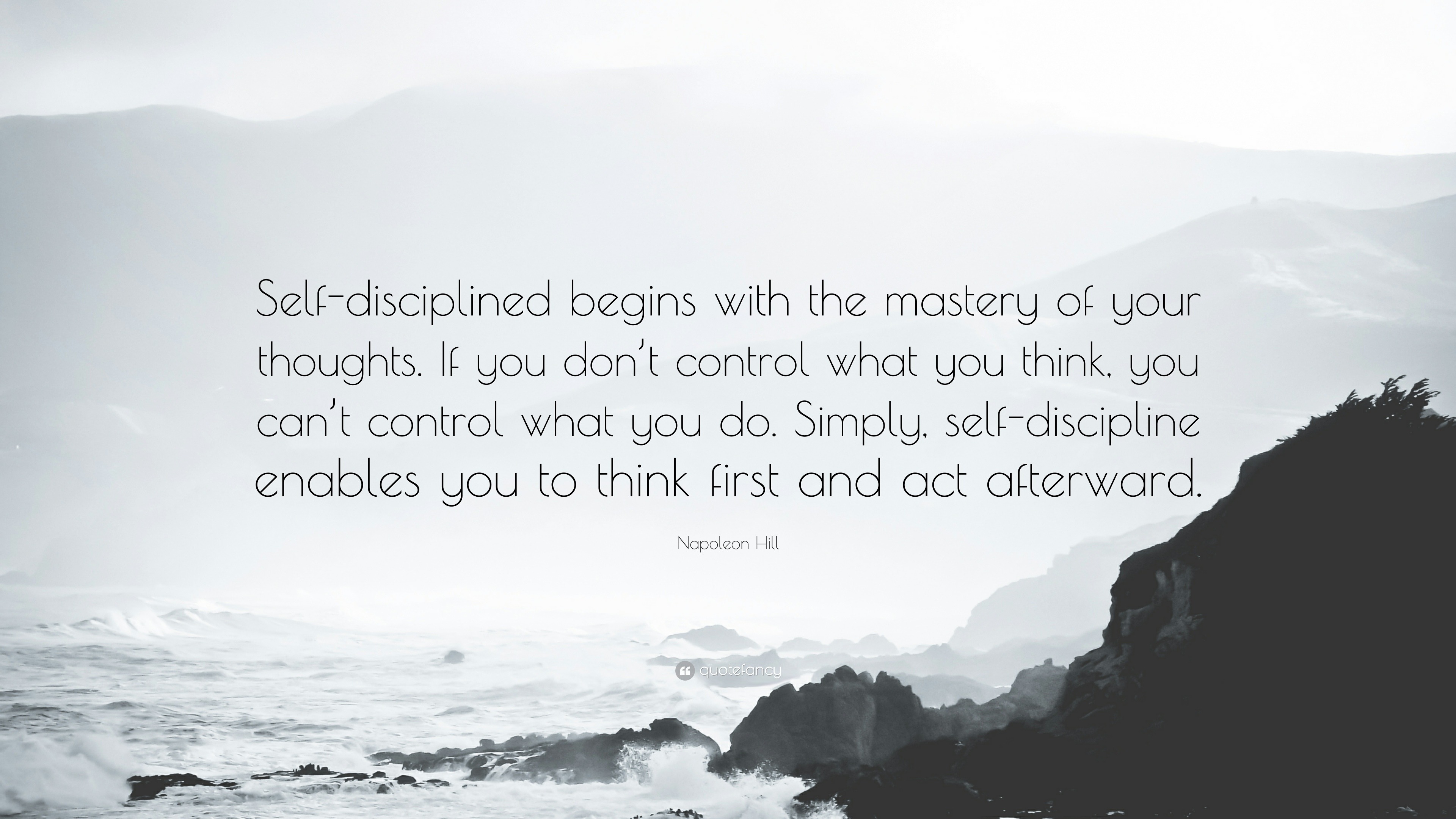 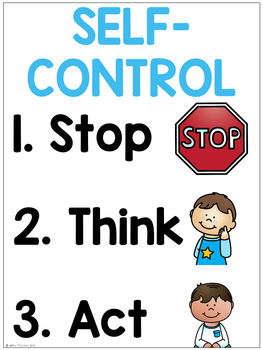 Like most of these 17 principles, we can look at self-control as a muscle. And just like our physical muscles, we can strengthen it by training. Examples from any given day can be:

The ability to exert self-control is commonly referred to as willpower. It allows us to direct our attention despite the presence of competing stimuli, and it underlies all kinds of achievement, from school to the workplace. It benefits relationships as well. Be a leader by being a person of poise and self-control.

Principle # 9: The Habit of Doing More Than Paid For

We get back in life what we give. By getting into the habit of always doing more than you’re paid for, you will meet with opportunities for expansion, advancement, and promotion at every turn of the corner. You might not get these opportunities immediately with your current employer; but eventually competitors will take notice and will gladly provide you with plenty of opportunity if your employer is not willing to do so!

How can you possibly do more than what you are paid for? Napoleon Hill tells us:

“Work which one does merely for the sake of making a living is seldom liked. It is often disliked or even hated. When engaged in work which he loves, a man may labor for an unbelievably long period of hours without becoming fatigued. Work that a man dislikes or hates brings on fatigue very quickly. A man’s endurance, therefore, depends very largely on the extent to which he likes or dislikes or loves what he is doing.”

In other words, the first step in The Habit of Doing More Than Paid For is making sure that you love what it is that you are doing.

Hill states that a pleasing personality is a person that attracts. It’s all about your character and how you carry yourself. Given your job or function, are you dressed for success? Do you speak with self-confidence? Is yours a firm handshake and a warm smile, or a limp, ‘dead fish’ handshake with a rigid, forced smile? 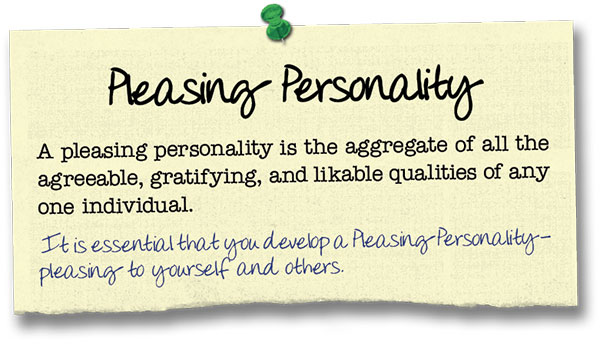 Do you offer an appropriate level of eye-contact given the cultural context or do you have shifty eyes that make people feel uncomfortable? Are you flexible in mind, body, and spirit? Do you express genuine interest in others?

People with pleasing personalities make other people feel good about themselves. They keep a positive point of view and demonstrate flexibility and patience. They treat people fairly and with respect.

These people also tend to be good listeners and conversationalists. They handle situations well and share their opinion in an agreeable manner. People with pleasing personalities typically like people and interacting with others.

If that recruiter had expressed even the slightest interest in what I did as a person, I would have overlooked the initial awkwardness of the call and come in for an interview. Her lack of a pleasing personality cost her and her company a number of lost contracts.

Success is almost a certainty for the person with a pleasing personality! 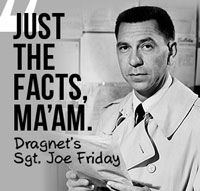 Don’t believe everything you read in the news. Much of it planted by powerful lobbyists and corporations with hidden agendas. Get into the habit of basing your decisions on factual information and avoiding gossip, rumors, and conjecture.

It is imperative that we maintain control of our thoughts. The Law of Success does not supersede or replace the Law Of Attraction. Your thoughts are things. If you focus on the bad news of the day or the latest water cooler gossip, you will bring more instances of those events into your life.

How do you ensure that you are practicing accurate thinking? Go back to principle #2 – you must have a definite chief aim! Focusing on this goal will keep your thoughts on a positive track. Visualizing your primary objective will bring that outcome to you quicker. Filling your spare mental capacity with affirmations that beckon your desires to you are all ways that you can make sure that you have accurate thinking. 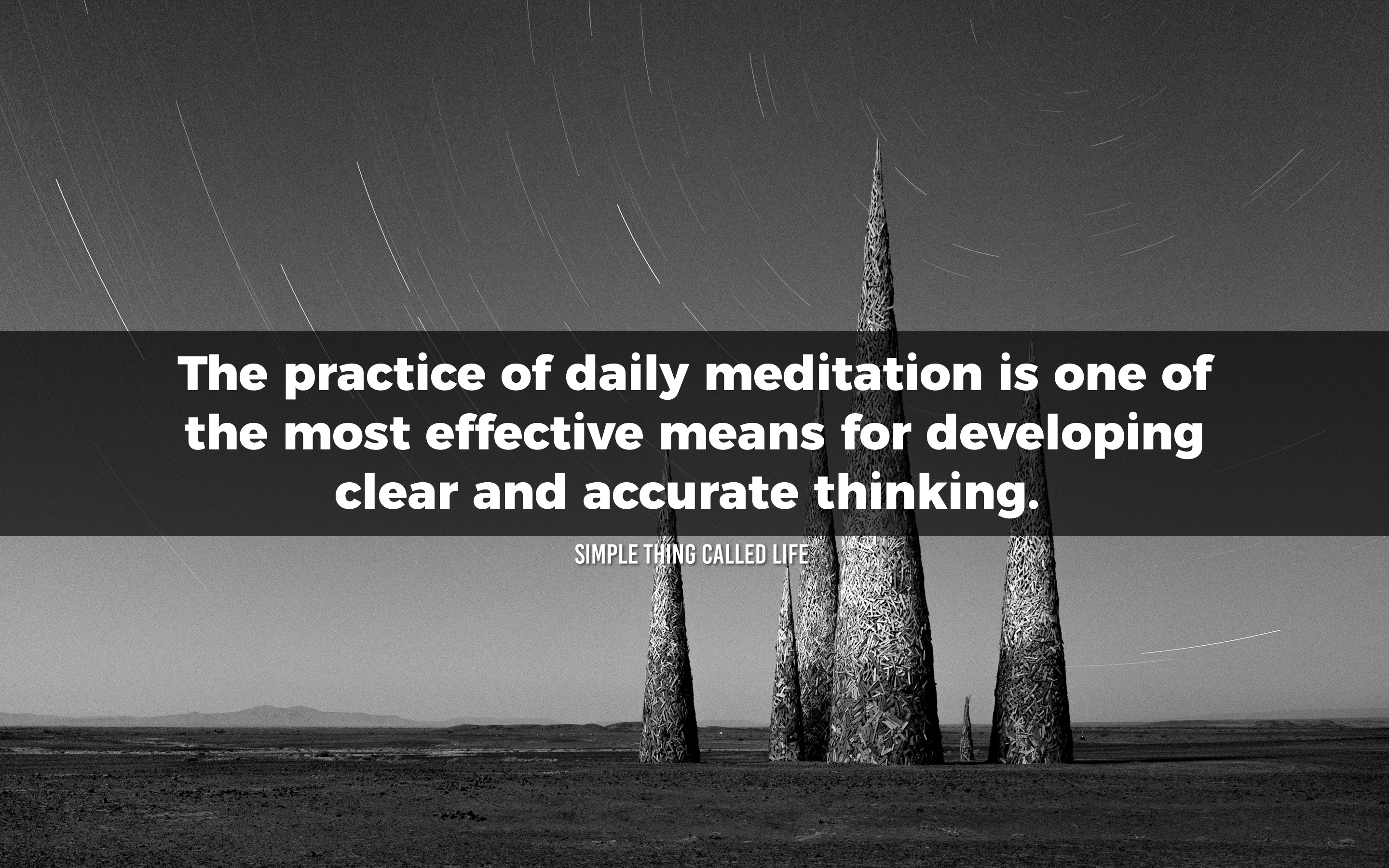 I would encourage you to share these principles with your friends, family, and inner circle.  After all, according to personal development guru Jim Rohn said “you are average of the five people you spend the most time with.” As you head into the New Year, consider creating your own Master Mind (Principle #1) of people to support you. It will make embracing these principles – and your ultimate success – so much easier!