This is the ninth in a series of 10 guest posts that will show you how to successfully apply the Law of Attraction.

My name is Heather Matthews, and I am a transformational speaker, life coach, and an expert on energy flow.

I spent years of my life chasing the carrot of more money and more time all because I believed that if I just worked hard enough, I’d eventually get there…

Yet all I needed was one simple secret technique that turned everything around for me… the secret that allowed me to get more, while doing less – the secret behind “The Secret”.

Plain and simple and as crazy as it sounds, the only way to quit struggling and instead start feeding endless cash and abundance into your life like an ATM machine on hyper-speed… is by giving up on hard work and forcing the Universe to give you everything you’ve ever wished for.

It’s surprisingly easy to get started. You just need to follow these 10 Super Simple Steps to Attract Everything You’ve Ever Wanted:

Fail spectacularly? What does that even mean?

As the poem goes, the road to success is not straight. Even as you apply the Law of Attraction, life presents ups and downs; peaks and valleys.  It is your determination that gets you from peak to peak and your persistence that eventually gets you to the realization of your dreams. Here’s something most people don’t know about the Law of Attraction: before you can enjoy success and find true happiness, you need to crash and burn. It is impossible to live without failing at something.

Michael Jordan famously said, “I’ve missed more than 9,000 shots in my career. I’ve lost almost 300 games. Twenty-six times I’ve been trusted to take the game-winning shot and missed. I’ve failed over and over and over again in my life. And that is why I succeed.”

“My great concern is not whether you have failed, but whether you are content with your failure.” – Abraham Lincoln, 16th President of the United States

Failure is, inevitably, part of any success story. Those at the top have pasts littered with start-ups that went under or ideas that never got off the ground. The greatest risks yield the greatest reward, but you have to risk it over and over again until you create something that sticks. If you never try, you’ll forever wonder “what if…?”

It’s better to go after what you want and risk failure instead of playing it safe and not trying at all. Blake Mycoskie, founder and “chief shoe giver” at TOMS shoes was featured in an article where he was quoted: “As much as it hurt, I realized that failure is an inevitable part of thinking big and going after what you’re really passionate about.”

Since Richard Branson started his first business in 1966, it’s safe to say the mogul has launched close to 100 companies (if not more) under his Virgin brand. Virgin has plastered its name on everything from airlines to wine clubs to underwear. It’s not surprising that Sir Richard would have a few failures under his belt. And given the over-the-top way that Richard Branson does business, it’s also not surprising that some of them are pretty spectacular.

To answer the question that started this post: To fail spectacularly is to set in motion something that messes up your whole life and shakes up your world view, makes you reassess your relationships, causes upheaval in your financial situation, or cracks open your understanding. And yes, As Michael Jordan, Blake Mycoskie, and Richard Branson will tell you, it can actually be good for you in the long run!

Success is going from failure to failure without a loss of enthusiasm. – Sir Winston Churchill

Now that we’ve acknowledged that failing is a part of life, we can begin to wrap our minds around a new 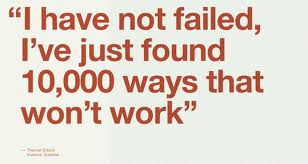 working definition of the word “failure”. In his book The Power of Failure, Dr. Charles C. Manz, the Chaired Professor of Business Leadership at the University of Massachusetts, sees failure as a “short-termed unexpected result that reflects a challenge in progress.” He goes on to say that failure provides three positive aspects: “a stepping stone to success, the opportunity for learning and development and an opportunity for creative change and innovation.”

Something about that new spin on the failure concept really appeals to me. The fact that it is not an ending but “a challenge in progress” makes it sound less like a pitfall and more like a hiccup. If one decides to adopt that premise and start to embrace the learning lessons inherent in failure we can begin to see the benefit that our successful role models have exhibited. Do not let failure diminish your belief in the Law of Attraction.  Instead, look for the lessons to be learned from the failure. Don’t view an obstacle as a sign that you’re not meant to have these great things or are “not good enough” for them. Instead, ask yourself what these challenges can teach you. Once you’ve stared your obstacles straight in the face and had an honest think about what you can learn from them to make your life better in the future, it’s worth taking some time to mull over the good things that directly stem from these apparent obstacles. Often, things that we think are failures are actually blessings in disguise. Finally, as well as trying to learn valuable lessons and see genuine positives in life’s challenges, you need to focus some of your energy on self-care as you bound back after what feels like a failure. Consider new affirmations and visualizations and spending more time doing things that you genuinely love.

To create order in your life, you’ll have to embrace the chaos that comes before it.

This is where you’ll find the real lessons, even if they hurt a little.

And as Confucius said: “Our greatest glory is not in not failing, but in rising every time we fail.”