Welcome to the conclusion of this special three part series commemorating the 21st Century Edition of Napoleon Hill’s landmark work, Law of Success, which reveals 17 Success Principles that can help take your career and life to the next level. These are proven principles based on Hill’s 25 years of personal research studying the lives of over 500 of the world’s greatest achievers.

“Concentration is the act of focusing the mind on a given desire until ways and means for its realization have been worked out and successfully put into operation.” – Napoleon Hill 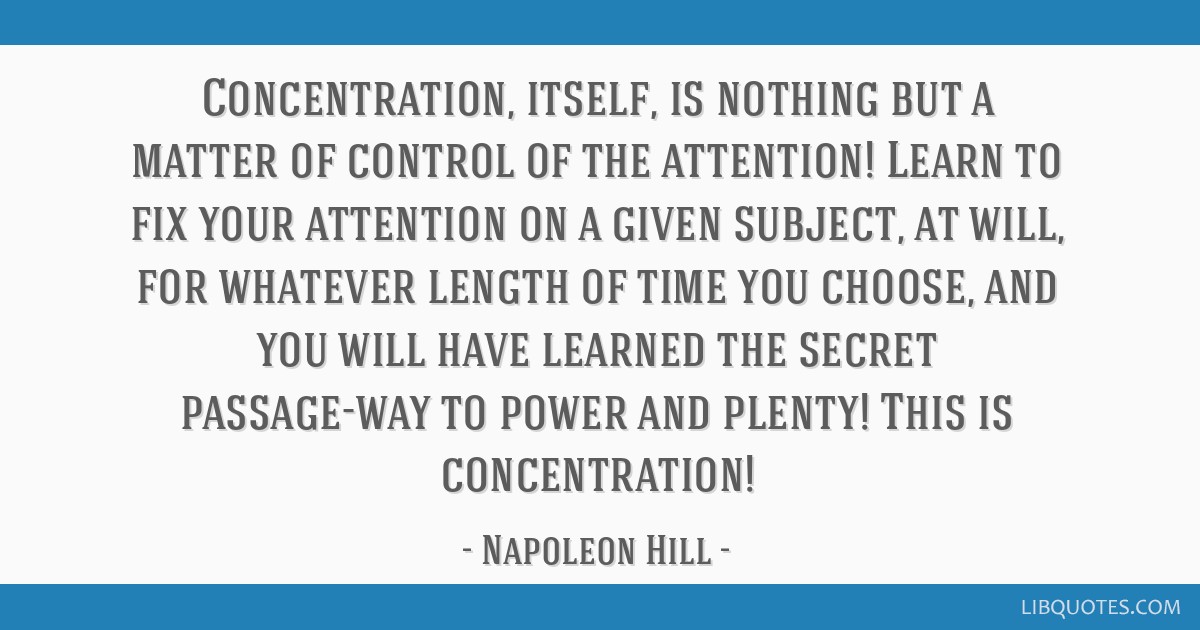 In this age of mass communication, we are beginning to face a global epidemic of mass distraction that is becoming detrimental for concentration.  The sources of distraction available to us include email, cell phones, pagers, text messaging, video games, GPS navigational systems, video games, DVD players, TV, web cams, blackberries, faxes, iPods, iPads, and the explosion of social networking sites, just to name a few.

When used intelligently these tools can be powerful, but when used ineffectively, they become what I call, “Weapons of Mass Distraction!” For concentration to be effective, Hill maintains that it is vitally important to keep your mind focused on ONE subject until you’ve mastered it; to focus on ONE given problem until you’ve solved that problem. So you can see how an email reminder or text alert can be counterproductive to concentration.

In this age of sensory overload, some sensory deprivation might be in order. Hill recommends that you set some time aside everyday where you can enter a quiet place, close your eyes, and put your fingers in your ears, blocking all light and sound, and just repeat your chief aim and see yourself in full possession of the object of your aim (Visualization!). Just practicing this simple technique everyday will help you concentrate on doing the important tasks that will eventually lead to a quantum breakthrough in your life.

“Cooperation is the foundation of all successful leadership.” – Napoleon Hill 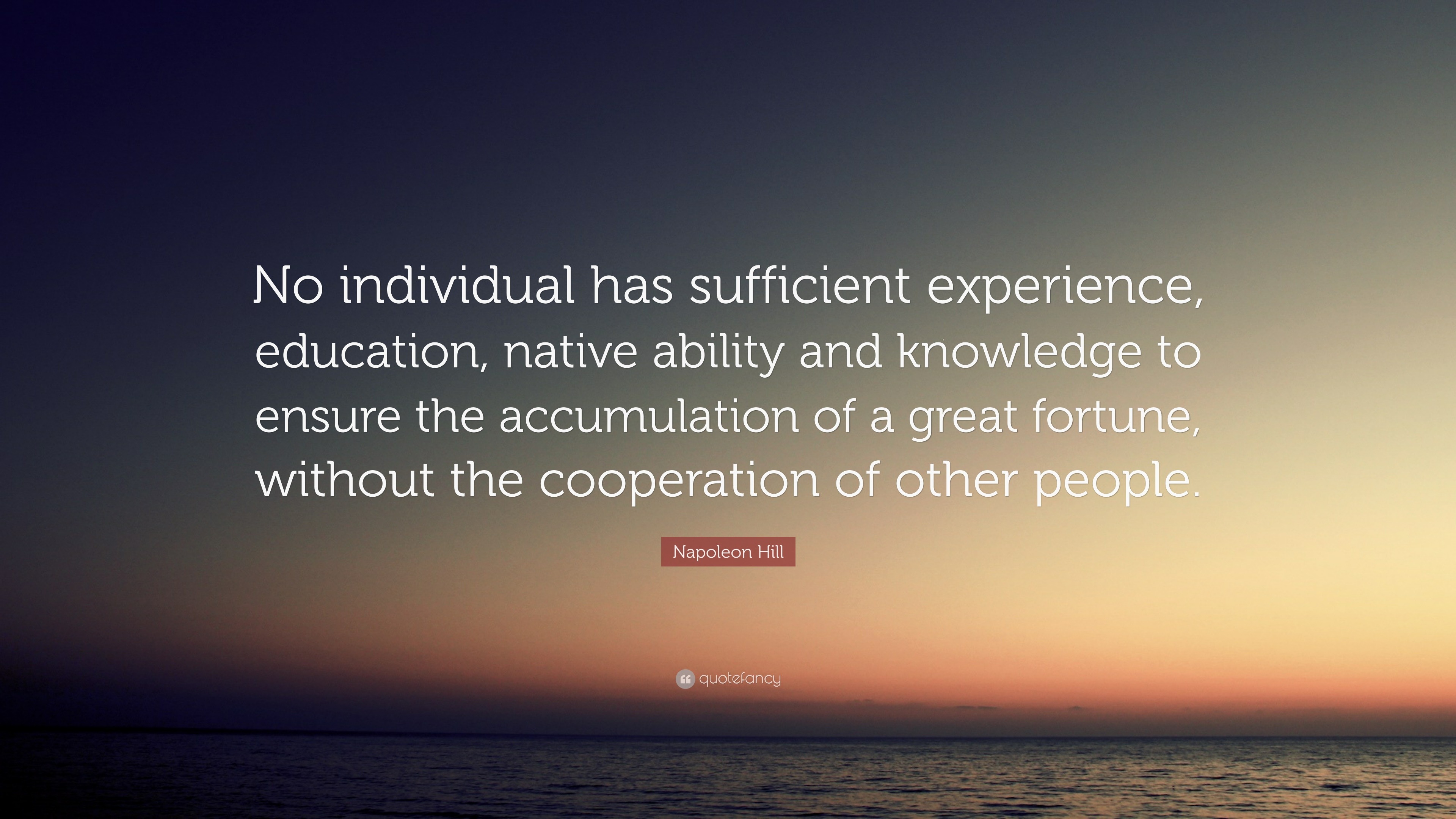 According to Hill, there are two forms of cooperation:

1). The cooperation between a group alliance to achieve a desired end (Success Principle #1 – Master Mind), and

2). The cooperation between the conscious and subconscious minds to draw upon creative intelligence

Power is developed through organized effort. And for any organized effort to be successful, the harmonious cooperation of people focused on a singular purpose is required.

Harmony is the key. And it would serve you well to study the main personality types of people before forming a team so you can bring together people who complement each other rather than compete against each other. (“What Type Am I” by Renee Baron is a good first book to understanding personality types).

One thing in the Law of Success that really struck me as very powerful was an important observation that Napoleon Hill made: “A great leader is one who understands how to create a “motivating objective” that will be accepted with enthusiasm by every member of [the] group…Most people will work harder for the attainment of an ideal than they will for money.”

This is what harmony can achieve, and it is the foundation for cooperation!

“If you want to increase your success rate, double your failure rate.” -Thomas Watson, Sr. Founder of IBM 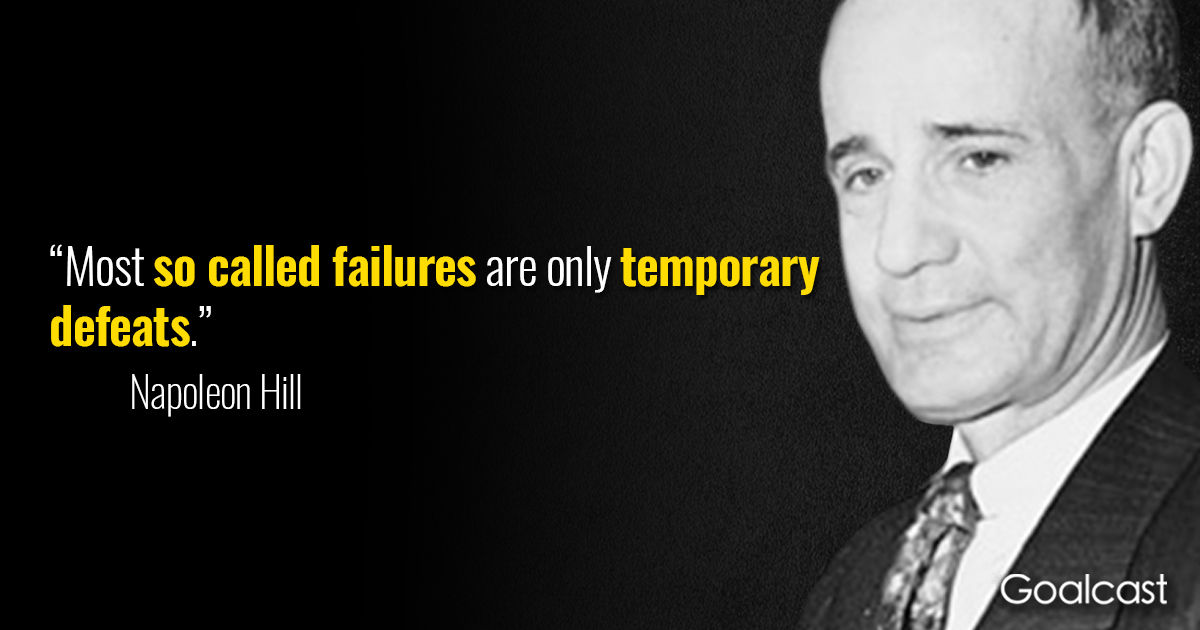 Profiting from failure is an overdone topic in the field of personal development so I won’t spend too much time on this particular success principle. It’s overdone because there’s much truth in the idea of people reaching higher levels of success by persevering and learning from failure instead of quitting. It’s no accident that John D. Rockefeller felt that perseverance is the single most important quality to achieving success.

failure they’ve overcome and learned from. That old cliché, ‘if at first you don’t succeed, try, try again’ certainly applies here. Of course, I’m not suggesting that you keep on doing the same thing and expecting different results; after all, that is Einstein’s definition of insanity!

Rather, seek counselors and mentors that you can trust to help evaluate the effectiveness of your plans. Explore the reasons that are limiting your success by asking them how they see you limiting yourself.

If your first plan to achieve your chief aim in life does not succeed, then change it! And keep on changing it until you’ve reached your target, just as an airplane makes thousands of adjustments and flight corrections before reaching its destination.

“Minds are like parachutes; they work best when open.” – Lord Thomas Dewar 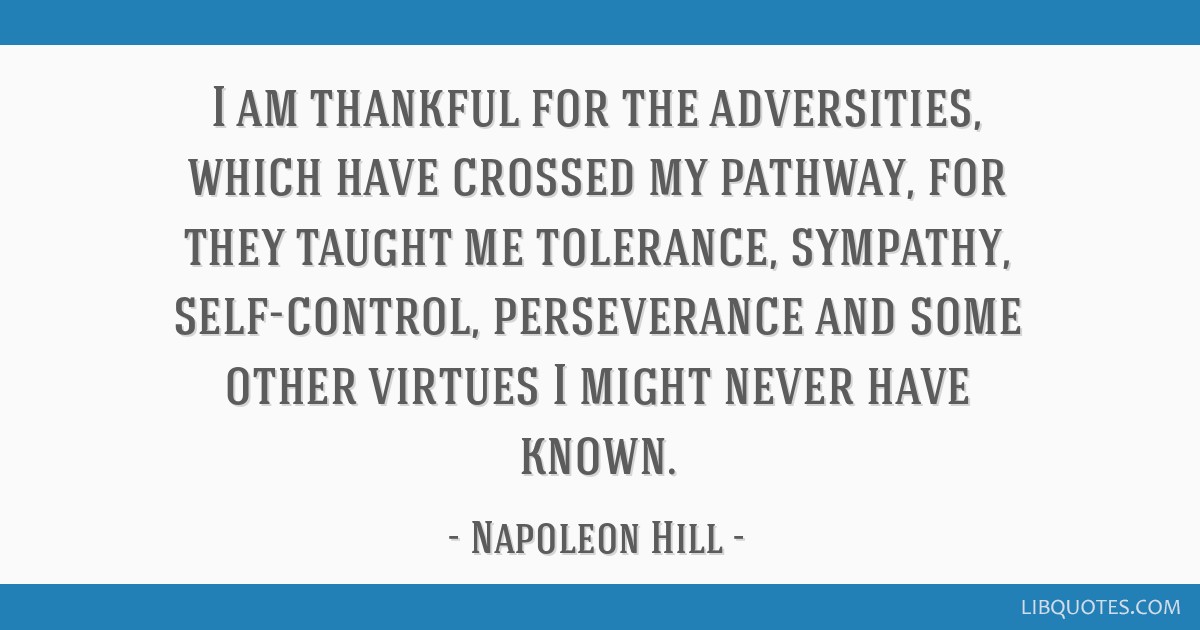 For our purposes, the definition of tolerance is sympathy or indulgence for beliefs or practices differing from or conflicting with one’s own. This implies an open mind to others’ ideas and suggestions. If, on the other hand, we adopt a closed mind we stop acquiring knowledge.

Tolerance involves embracing new ideas and having an insatiable curiosity for learning other people’s customs, belief systems, and unique perspectives. To strengthen cooperation and promote greater solidarity within groups, there is a need for people to adhere to the principle of cultural tolerance. Being culturally tolerant means not discriminating against people of other cultures.

The sad reality is that not all people practice cultural tolerance. Some people are culturally intolerant, perhaps because they suffer from a sense of cultural superiority. Such people are often arrogant, and discriminate against people of other cultures, which create communication barriers and animosity. Cultural intolerance is the root cause of xenophobia, racism and unilateralism, and often leads to tensions and conflicts.

Finding ways to harness cultural differences within teams and organizations will be the new currency in an increasingly globalized economy. As such, I would argue that this is one of the most important of the Success Principles!

We reap what we sow. What goes around comes around. Therefore, the Golden Rule is: do unto others as you’d have done unto you. Before doing anything, ask yourself if it will benefit or hurt anyone else involved. 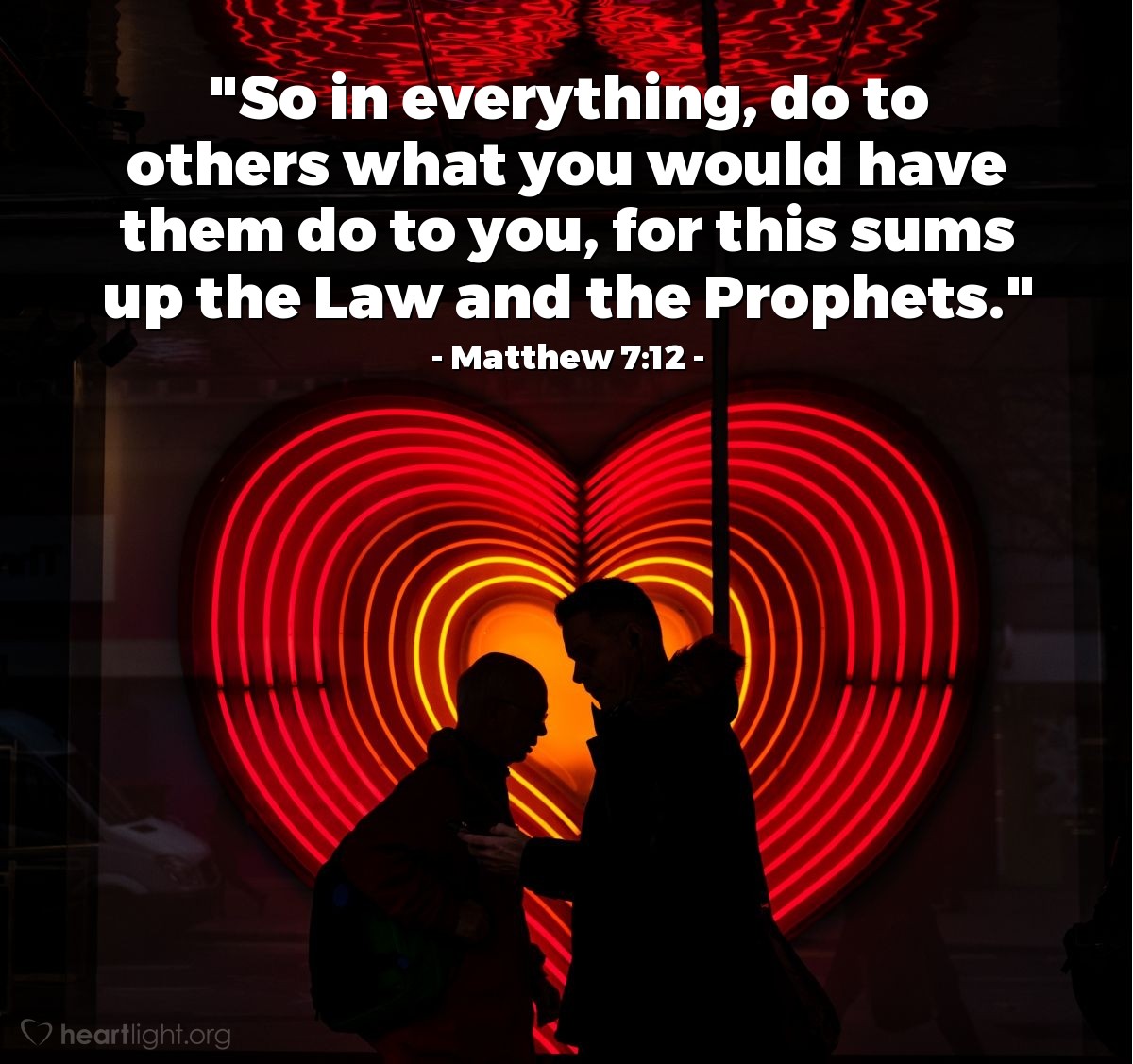 Before Napoleon Hill incorporated the Golden Rule into his list of Success Principles, the Bible recorded Jesus’ words in Matthew 7:12 – So in everything, do to others what you would have them do to you, for this sums up the Law and the Prophets.

It’s easy to be self-centered. To transcend self, think more of what the other person wants and feels before acting. Selfish pursuit of your chief aim without regard for others will eventually come back to haunt you.

See the good in others. Catch people doing things right instead of always looking for the wrong. Kindness and justice toward others goes a long way in establishing successful business and personal relationships. As Ralph Waldo Emerson once said: “Trust men and they will be true to you; treat them greatly, and they will show themselves great.” Live this philosophy and your life will be enriched in many unforeseen ways.

“We are what we repeatedly do. Excellence, then, is not an act, but a habit.” – Aristotle 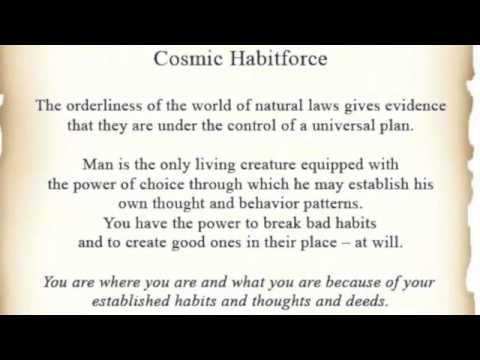 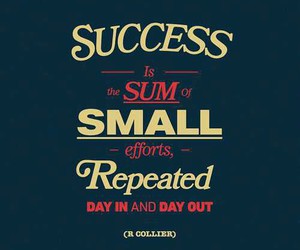 When you fix in your mind a purpose consciousness focused on your chief aim in life through repetition of thoughts (affirmations) and deeds (visualization), Cosmic Habitforce will take over and carry it to its logical conclusion, just as an acorn seed will always produce an oak tree through proper care and nurturing.

It takes constant vigilance, determination, and willpower to maintain that purpose consciousness, but eventually Cosmic Habitforce will always bear fruit and your life will be richly rewarded.

In closing, I’d like to point out that at the beginning of every chapter in Napoleon Hill’s “Law of Success” are the words: “You can do it if you believe you can!”

It really is that simple. I’m not saying it’s easy, but it’s really that simple. Mahatma Gandhi once said, “If I believe I cannot do something, it makes me incapable of doing it. But when I believe I can, then I acquire the ability to do it even if I didn’t have it in the beginning.” 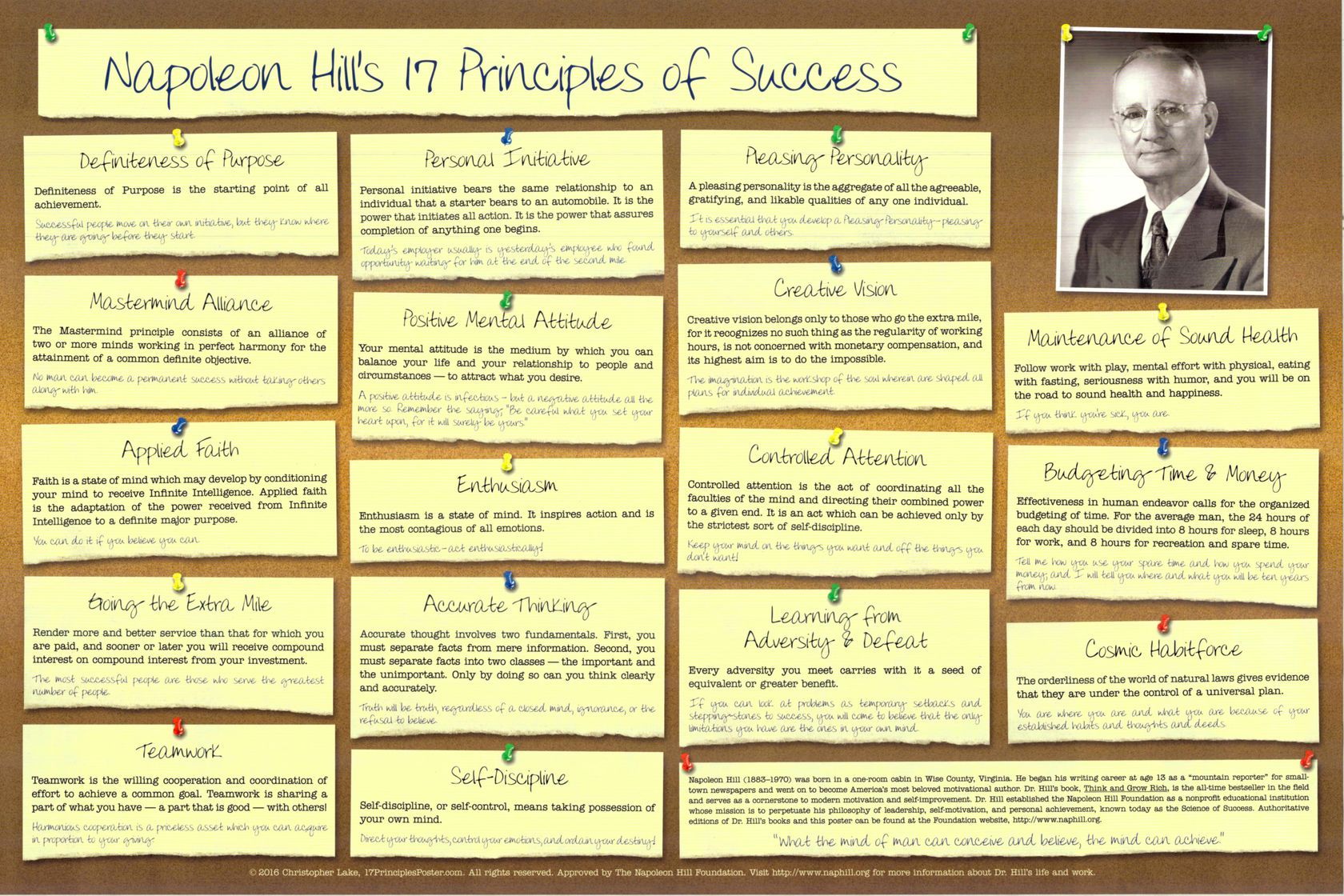 Believe in yourself! Believe you can do it and move forward this day with faith and confidence with Napoleon Hill’s 17 Success Principles. Many blessings to you along your journey.